Myristica fragrans is an evergreen tree indigenous to the Moluccas (or Spice Islands) of Indonesia. Nutmeg comes from the fruit of a 50 ft (15 m) tall tropical evergreen tree. This tree grows in Indonesia. The bark is smooth and grayish brown with green young branches and leaves. The oblong, fleshy fruit, called the nutmeg apple, contains a nut from which nutmeg is made. The dried nut and essential oil are both used as medicine. 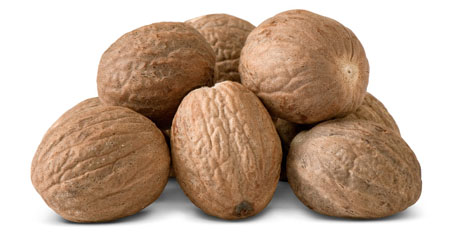 The nutmeg tree is a large evergreen native to the Banda Islands in the Moluccas and grows to a height of about 18 m. It produces fruits fifteen to twenty years after planting. The fruit of nutmeg tree, which is similar in colour and size to apricot, splits when ripe revealing the brilliant red arils encasing the brown nut. The red arils on drying become orange in colour and are the mace of commerce. The nut is also dried until the kernel inside rattles. 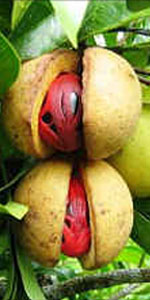 The tree is about 25 feet high, has a greyish-brown smooth bark, abounding in a yellow juice. The branches spread in whorls - alternate leaves, on petioles about 1 inch long, elliptical, glabrous, obtuse at base - acuminate, aromatic, dark green and glossy above, paler underside and 4 to 6 inches long. Flowers dioecious, small in axillary racemes. Peduncles and pedicles glabrous. Male flowers three to five more on a peduncle. Female flowers differ little from the male, except pedicel is often solitary. The seed or nutmeg is firm, fleshy, whitish, transversed by red-brown veins, abounding in oil.The tree does not bloom till it is nine years old, when it fruits and continues to do so for seventy-five years without attention. In Banda Islands there are three harvests, the chief one in July or August, the next in November, and the last in March or April. The fruit is gathered by means of a barb attached to a long stick. The mace is separated from the nut and both are dried separately. The nutmeg or kernel of the fruit and the arillus or mace are the official parts. 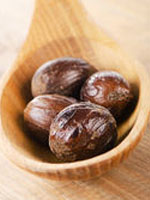 A spice, native to the Spice Islands, that is used to add a sweet and savory flavor to a variety of foods. It is made from the seed inside the hard pit of the peach-like fruit grown on the nutmeg tree. The yellow colored fruit is edible and when split open, exposes a net-like casing that covers the nutmeg pit. The casing around the pit, referred to as mace, is also harvested, dried and used as a spice. When first removed from the nutmeg seed, this mesh casing or membrane (aril) is oval shaped and somewhat brittle. It is flattened, dried and sold as mace blades or ground mace. Like nutmeg, mace has a sweet and flavorful spice, which can be substituted for nutmeg or cinnamon to complement a variety of foods.

Nutmeg is used in both Western and Chinese herbal medicine. It is most popular as a spice in food and drinks, and is also used in cosmetics and soaps. Nutmeg oil is used in perfumes and ointments. In ancient Greece and Rome, where nutmeg was rare and expensive, people thought it stimulated the brain.

1 - Disease preventive compounds - Nutmegs are known to have positive effects on the body owing to their general plant derived compounds, which possess the capability to prevent diseases. This is one of the best nutmeg uses.

2 - Aphrodisiac - This aromatic spice has been used as an aphrodisiac since ages and also has hormone stimulating properties.

3 - Toothache - Nutmeg oil contains eugenol which is used in dentistry treatments to cure toothache. The oil is also used for body massages to cure joint pains.

4 - Nausea - Nausea can be cured by the consumption of fresh nutmegs with honey.

6 - Optimum health - The vitamins and anti-oxidants present in nutmegs are also a part of the body’s nutrition cycle that helps maintain optimum health by supplying necessary nutrients.

7 - Nervous System - Nutmeg oil is generally used for preventing digestive system disorders but is also beneficial for proper functioning of the nervous system of the body and must be imbibed in our daily diet.

8 - Red blood cell production - The iron content in the nutmegs improves the red blood cells count in our blood.

9 - Blood pressure - Copper is also an important nutrient in nutmegs which helps to maintain the blood pressure and consequently helps in the balance of heart rate too.

10 - Fights Skin Infection And Signs Of Aging - Nutmeg is widely used for its anti-bacterial and analgesic properties. It helps in reducing wrinkles, fine lines and other signs of aging.

World production of nutmeg is estimated to average between 10,000 and 12,000 tonnes per year, with annual world demand estimated at 9,000 tonnes. Indonesia and Grenada dominate production and exports of both products, with world market shares of 75% and 20%, respectively. Other producers include India, Malaysia (especially Penang, where the trees grow wild within untamed areas), Papua New Guinea, Sri Lanka, and Caribbean islands, such as St. Vincent. 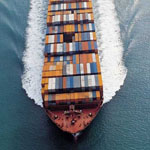 Recipe for Beverages with Nutmeg 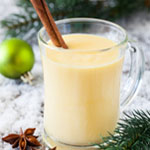 A: Mix the egg yolks and slowly add the sugar until light and fluffy. B: In a separate pan combine the cloves, cinnamon and milk until simmering. C: Slowly add the milk mixture into the egg mixture whisking constantly. Then pour back into the pan and heat on a medium heat, stirring the mixture until it begins to thicken. D: Once suitably thickened, remove from the heat and stir in the cream. Strain the mixture to remove the cloves and let it cool. Once cooled, stir in the nutmeg and vanilla extract (add the bourbon now if you like).

Recipe for Cooking with Nutmeg 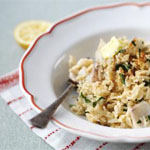 A: Cook the onion gently in the butter for a few minutes, then add the rice. B: Continue cooking gently and stirring, adding the curry powder and nutmeg. After a few minutes, add the milk, cream and 250ml/9fl oz water. C: When the mixture begins to simmer, add the fish and continue simmering, stirring occasionally until the rice is cooked. (You may need to add a little water if the mixture becomes dry.) D: Season, add the parsley and stir. Add the eggs and garnish with cayenne and nutmeg if using. Serve topped with a knob of butter and wedges of lemon.

Recipe for Dessert with Nutmeg 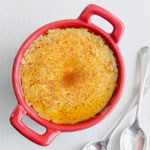 A: Place the milk and cream in a large bowl, and stir in ¼ cup sugar. Whisk gently, until the sugar dissolves. Add the eggs, and beat until creamy. B: Grate about 1 teaspoon of fresh nutmeg into this mixture, and whisk well. Pour into a heatproof glass pie dish (or into 4 ramekins). C: Place a heatproof trivet in a large pot, and place the pie dish or ramekins on top. Gently pour in enough boiling water, so it just touches the bottom of the pie dish. Cover the pot with a tight fitting lid, and steam the flan for 30 minutes, until it is set, but with a wobbly middle. D: While the flan is steaming, make the caramel syrup. Place the remaining sugar in a heavy based pan, and gently sprinkle over the ¼ cup water. Place on a medium heat, and simmer gently until the sugar melts into a sticky golden brown caramel (watch it carefully and don't let it burn). Take off the heat and stir in the remaining water, until you have a thin, caramelly syrup. E: When the flan is done, gently run a sharp knife around the edges. Pour in the caramel syrup around the edges, so the flan is soaked in the syrup. F: Serve the flan warm, at room temperature or chilled